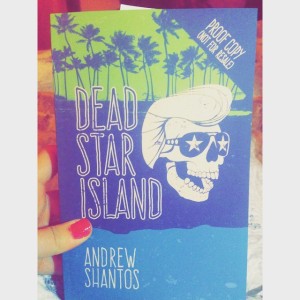 When I was first approached about this book, it really piqued my interest. I liked the idea of well-known superstars who faked their own death to live a life of luxury on ‘Dead Star Island’ away from the press and pressure of life as a celebrity where their every whim was dragged through the press.

When John Lennon is shot dead on the island, the director Christian calls on an old school friend to help solve the murder. Mario Gunzabo was once Greece’s top detectives but when tragedy struck he has let life crumble around him and now passes his time as a tennis coach with a penchant for alcohol. Whilst on the island Gunzabo tries to uncover who the killer may be before they strike again but clearly some of his own issues to work through.

Although well written and at times quite humorous the novel just lacked something. There were moments of unnecessary filler to the story where things were described that I felt didn’t need to be. Also, and I don’t know if this was an age thing, but there were a couple of the superstars who I had trouble recognising. And those I did recognize I felt that their dialogues were somewhat contrived and two dimensional.

As the novel progressed I found Gunzabo’s story more emotional and gripping than anything else, but just like the ending was an anti-climax, so too was the protagonist’s story. There could have been a lot more tension and ‘whodunit’ thrown in considering there were so many characters but it just seemed to lack the promise and page turning abilities I had hoped.

Not a bad debut novel for Andrew Shantos, the level of writing shows great skill but it just lacked that special something to keep me interested for long periods of time.