The Wasp Factory by Iain Banks is one of those books that has always been on my list of books ‘I must read’ partly because the title intrigued me and partly because of how often I have heard people refer to it as ‘such a weird book’ So when I embarked upon settling down and reading this, I really didn’t know what to expect, if anything. 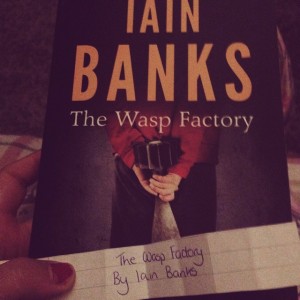 Meet Frank, a sixteen year old who lives in a secluded part of Scotland, and doesn’t technically exist, according the official paperwork. From the first Chapter it is clear to see that Frank isn’t your typical teenager and instead of favouring football and girls, he prefers to make sacrificial poles made from the heads of animals, to ward off intruders.

As the book progresses Frank confesses to how he has killed three people, two boys and a young girl, all members of his family, and all for reasons that, for me, never became fully clear. He describes each murder and how he managed to escape suspicion, despite being present with each of the people when they met their untimely and cruel demise. I think it was perhaps the second and third murder that I found particularly difficult to read, so heads up if you haven’t read it and plan to. You may find yourself recoiling somewhat.

Throughout the book you learn about Franks childhood, his relationship with his father and his ‘crazy’ brother Eric, who also has a dark and dangerous streak and sets fire to dogs (sorry dog lovers, you may not like this book) The setting for the book is perfect, this little bubble of an island with dunes and bunkers and plenty of land where Frank can play out his little macabre hobbies. As the book develops Eric has escaped the hospital where he was being held and is making his way back home, this adds to the tension in the book and helps build up the climax for the latter part.

Frank consults his Wasp Factory for answers to questions – as an aside The Wasp Factory is basically a maze of death for Wasps that Frank captures and kills, with each path resulting in a different death. He keeps being warned by the Factory about a Fire. Again, this adds to the tension being built as events start happening that indicate his brother is getting closer to home. For those of you who like some closure, you do find out what made poor Eric turn ‘mad’ and I think out of the entire novel, this particularly was the most gruesome imagery I came across. Be warned it isn’t for those with a sensitive stomach.

The book climaxes to a pivotal moment when more secrets are exposed and the truth about Frank is revealed, but not in the way you might think. An evocative novel, which is incredibly gothic in its tone. I found the ending a little flat, but overall not a bad read. I’d recommend this to people who want something macabre and for those who like to be entertained by the darker aspects of life.

Keep your entrails and sticks and dice and books and birds and voices and pendants and all the rest of that crap; I have the Factory, and it’s about now and the future; not the past.

This one came out of the TBR jar the other day, it’s a book I’ve often heard a lot about but have not had the opportunity to read…Until now.

A friend of mine said it’s one of the most bizarre books he has ever read, as usual, only time will tell.

The Wasp Factory by Iain Banks.

I’ll post a full review as soon as I’m done.