In modern day society when you hear the word ‘Witch’ an image is conjured to mind of Halloween, a crooked nose and a pointed cap and the sad fact is, at one point in time there were actual women who were persecuted by their community because they were believed to have been consorting with the Devil and were condemned as Witches. 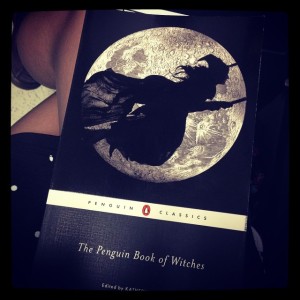 The Penguin Book of Witches by Katharine Howe is an incredibly detailed novel. Howe has done extensive research into the Witch Trials that took place not only here in the UK, but in America and most notably Salem. There are excerpts from novels written at the time, interviews that took place, trial notes and much more in this book.

This a fantastic piece of work which not only sheds a light on the horrific ways in which women were tried but also shows how delusional and brainwashed people were. It also seems that women of a lower class seemed to be targeted by these Witch Hunters and how much easier it seemed to place the blame of death on any woman accused of having ‘spirit guides’ which to the modern person would just be a lonely old woman who speaks to her cats.

In depth, eye opening and fascinating, this book makes for a great read even if you’re not interested in the history of the witch trials. My only criticism is some of the Old English words took a while to work around to make it easy flowing.

‘Sickness from unhygienic conditions made for a high infant mortality rate, but those deaths were easier to bear if they could be blamed on someone else’